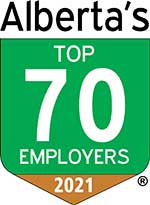 One of Alberta's Top 70 Employers

Every year, Reader’s Digest conducts a poll of Canadians to determine the most Trusted Brands in Canada. This year, more than 4,000 votes were tallied to reveal the winning brands for 2021.

We are thrilled that again this year, Blue Cross has been voted as Canada’s Most Trusted brand for health and dental insurance.

Canadians were asked in an open-ended question to identify the brands they trust the most across 33 product categories from consumer-packaged goods to financial institutions and Canadian retailers.

One of Alberta's Top 70 Employers

Alberta Blue Cross has, for the 13th consecutive year, been selected as one of Alberta’s Top 70 Employers, a special designation recognizing Alberta employers that lead their industries in offering exceptional places to work. In 2021, we were recognized as a top employer for our focus on employee health and wellness, flexible work arrangements, virtual wellness breaks, in-house training program and community involvement. Learn more about why we were selected.

Alberta’s Top 70 Employers is an annual competition organized by the editors of Canada’s Top 100 Employers. Employers are compared to other organizations in their field to determine which ones offer the most progressive and forward-thinking programs.

Employers are also evaluated according to the following national criteria:

In fall of 2018, for the second time, Alberta Blue Cross was named one of Canada’s Most Admired™ Corporate Cultures. This national program annually recognizes best-in-class Canadian organizations for having cultures that enhance performance and help sustain a competitive advantage.

It’s very rare to be recognized for this achievement twice and we couldn’t have done it without the continued commitment and support of our employees. They are the foundation on which our culture is built and directly responsible for delivering our vision.

Alberta Blue Cross was profiled in a National Post article series about the 2015 winners in February 2016.

The Canada Awards for Excellence is the nation’s superior form of recognition of organizational excellence. As recipients of this award, we are role models of excellence in the areas of leadership, governance, strategy, planning, customer experience, employee engagement, innovation and wellness.

One of Alberta’s Top 40 Largest Corporations

One of Alberta’s Top 25 Most Respected Companies

Alberta Blue Cross was ranked as one of Alberta's Top 25 Most Respected Companies in a survey published in the May 2015 issue of Alberta Venture magazine. The survey, commissioned by Alberta Venture through Leger Marketing, identified the organizations that are most respected in Alberta by combining responses from both consumers and the business community.

Alberta Blue Cross appears as number 15 on the ranking of the top 25 organizations, and in the top 3 rankings by industry in the “Other financial and benefits” industry category.

One of Alberta’s Top 10 Most Loved Brands

In 2015, Alberta Blue Cross was honoured to be named by Ipsos as one of Alberta’s Top 10 Most Loved Brands for the second consecutive year.

Ipsos based the ranking on a poll of over 1,000 consumers across the province, which asked them about a number of brands that they have strong ties with. Brands were then ranked based on personal relevance and closeness. The study also examined 12 key dimensions linked to how consumers interact with and love brands including interaction, visibility, social responsibility, innovativeness, trust, uniqueness, contribution to Alberta and personal experience with a brand.

Other organizations in the top ten included WestJet, Safeway, the Alberta Motor Association and the cities of Edmonton and Calgary. Visit the Ipsos website for more information about the study.

This site works better on newer browsers. You can continue to use this browser but it might affect your experience.